To get the most out of ephemeral developer environments, it is important to let Gitpod know how to build your project. We can achieve this by defining tasks in the .gitpod.yml configuration file.

Note: In your local developer environment, you likely set up your project only once. If you work in a team, you probably have written instructions on how to get started. With Gitpod, you automate these manual steps so that a new environment can be set up repeatedly by Gitpod.

Tasks are shell scripts that run on top of the Docker image you configure (learn more about custom Docker images).

With Gitpod, you have the following three types of tasks:

The order in which these tasks execute depends on whether you have Prebuilds configured for your project and which startup scenario applies. Let’s look at the details.

In this startup scenario, you can see how Prebuilds impact the execution order of tasks: 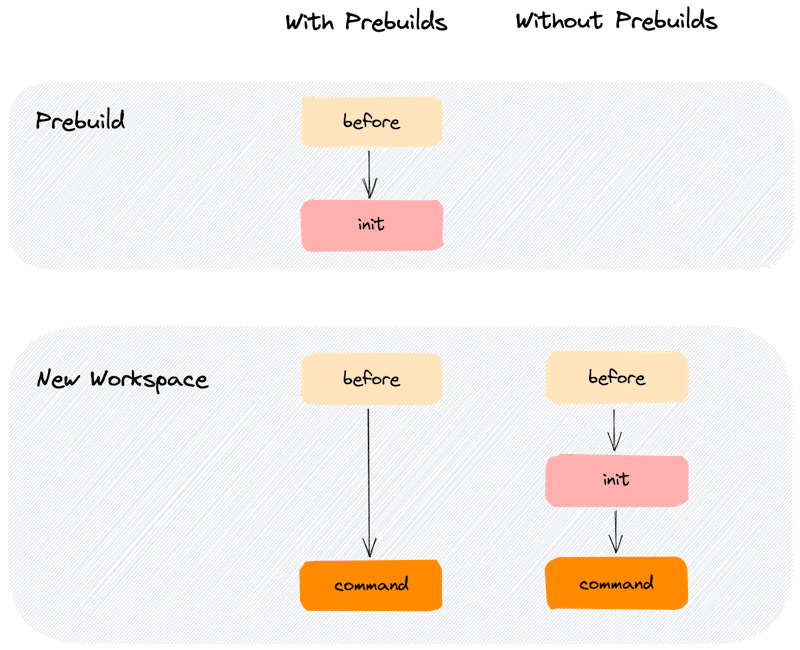 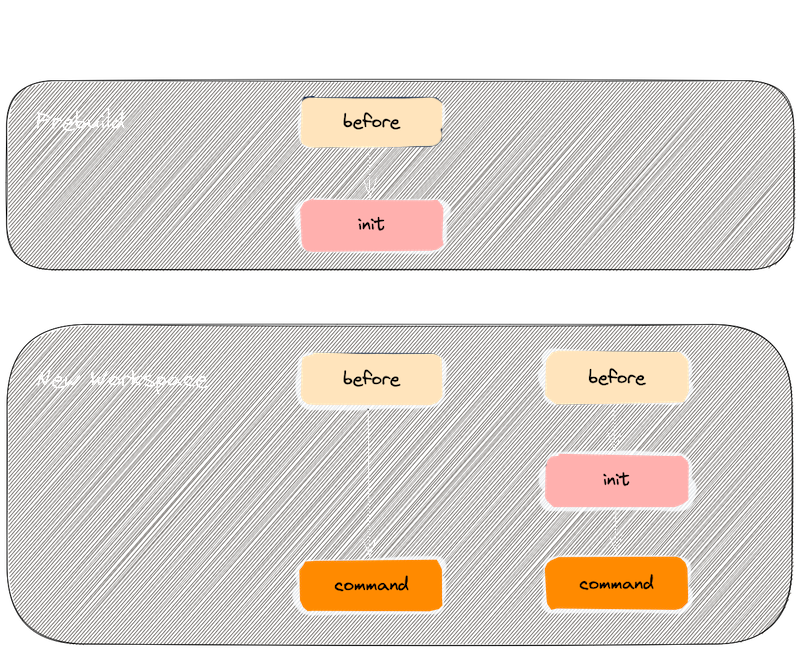 The init task is where you want to do the heavy lifting, things like:

As displayed in the diagram above, we highly recommend you enable Prebuilds for your project. In that case, Gitpod executes the before and most importantly, init tasks automatically for each new commit to your project.

By the time you start a new workspace, all that’s left to do is execute the before (optional) and command tasks. The latter most often starts a database and/or development server.

Let Gitpod run the time-consuming init tasks continuously behind the scene so you and anyone who opens your project on Gitpod doesn’t have to wait.

When you restart a workspace, Gitpod already executed the init task (see above) either as part of a Prebuild or when you started the workspace for the first time.

As part of a workspace restart, Gitpod executes the before and command tasks: 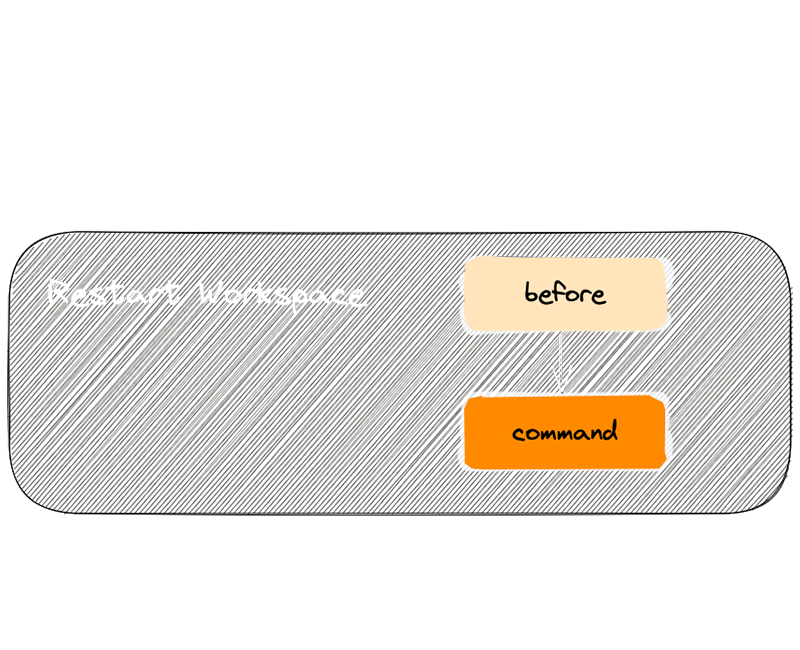 When you start a snapshot, Gitpod already executed the init task (see above) either as part of a Prebuild or when you or a team member started the snapshot’s initial workspace for the first time.

As part of starting a snapshot, Gitpod executes the before and command tasks: 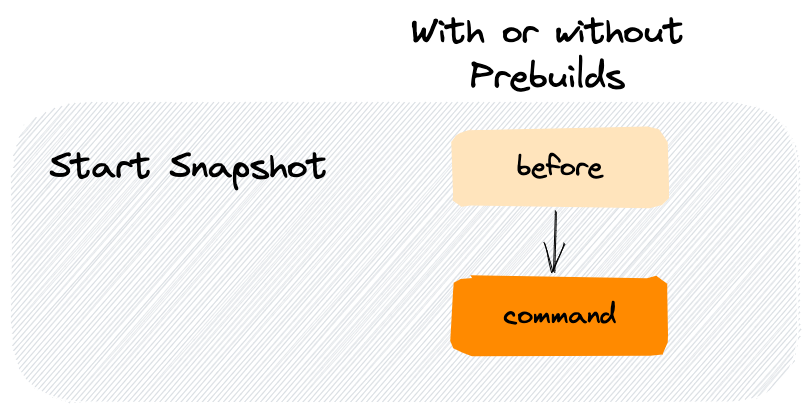 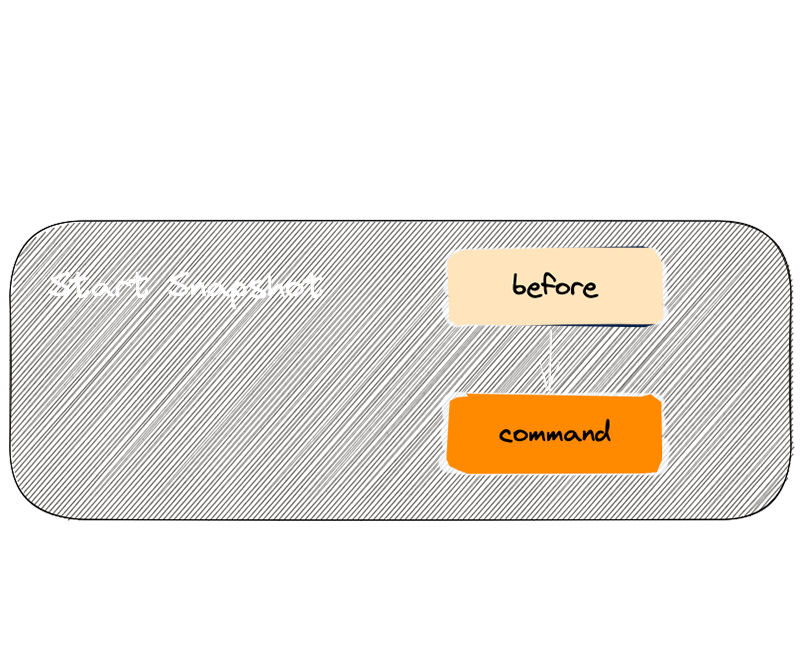 You can configure how the terminal should be opened relative to the previous task.

The examples below are common use cases you can get inspired by and adjust for your project’s needs.

Note: before and init tasks need to terminate while command can run indefinitely (i.e. until cancelled with Ctrl + C). This is because before and init may run as part of a prebuild and if these tasks do not terminate, the prebuild will eventually fail with a timeout.

Each task contains a single npm command. The init task terminates once the dependencies are installed while the command task starts a development server and does not terminate.

To run multiple commands for a given task, you can use the | notation where each line below (make sure you indent correctly) runs in sequence once the previous command terminates.

In the following example, the init task installs dependencies and configures a database. Then, the command task starts the dev server(s).

Note: In case of multiple terminals, there is no guarantee on the order in which tasks execute. The only guarantee you have is that before, init and command execute in that sequence per terminal.

Wait for commands to complete

When working with multiple terminals, you may have a situation where terminal 1 runs build scripts and terminal 2 and 3 require that these scripts complete first. This can be achieved with gp sync-await and gp sync-done.

Wait for a port to be available

Let’s say you have a web app dev server that takes a moment to start up to listen on port 3000. Once it’s up and running, you want to run end-to-end tests against http://localhost:3000.

You can achieve this with two terminals and the gp ports await CLI command.

Immediately exit for any command failure within a task

If you wish to halt an entire task with for an error within the task script, then you could do the following:

Gitpod starts all your tasks inside separate bash ($SHELL) shells. Gitpod can only assert the exit status of the shell process of a task. Normally bash or other shells don’t halt on a failure of a command unless you explicitly ask it to. bash only inherits the last exit status of a script run with it before it’s own exit. Hence Gitpod can’t determine if all of your commands inside the init task succeeded. To have that effect, you can put set -e; on top of task shell-commands and wrap your whole task-script with () to configure that particular task shell to halt and immediately exit with an error code for a failure of any command. This can be specially helpful for prebuilds (i.e init tasks)

We’d love to hear from you if you have specific questions or ideas for additional examples. Please click the following link to open a pre-configured GitHub issue: Ask for a new Start Task example.