Gitpod comes with great built-in support for JavaScript, TypeScript, and tools like Node.js, npm, and Yarn pre-installed. Still, depending on your project, you might want to further optimize the experience.

Here are a few JavaScript example projects that are automated with Gitpod:

Many JavaScript projects these days use some sort of build tool for things like bundling, linting, code-splitting and so on and they also use a package manager, typically either npm or Yarn for managing dependencies.

You can automate the process of installing dependencies and starting any tasks like build, lint, test and so on at the workspace startup, for doing so please create a .gitpod.yml file in the root of your project and add the tasks you want to be automated. An example might look like this:

language:
yml
👆 In the above example, we are telling Gitpod to run what is in the `init` phase at the time of workspace initialization and then afterwards run whatever is in the `command` phase.

Gitpod comes with the latest stable Node.js version pre-installed but let’s say your project uses a different version of node (say 14.8.0 for example), well the good news is that Gitpod also comes with nvm (a tool used to manage multiple active Node.js versions) installed. To install and configure the desired version of node create a .gitpod.Dockerfile and add the following to it:

Then, after committing your changes, start a new workspace, the version for that workspace will be what you’ve specified in your .gitpod.Dockerfile.

If your project’s package.json does not mention ESLint as a dependency then you have to install it first. For installing it add the following to the end of the init phase of your .gitpod.yml as shown:

and then search for eslint in the extensions tab and then install it from there using the install button as shown in the screenshot. 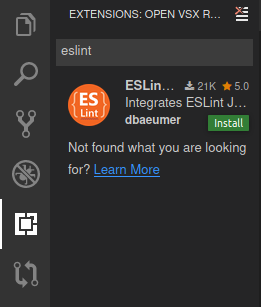 Making Live Reload work in Rollup based projects like Svelte

This section was moved into Svelte guide.