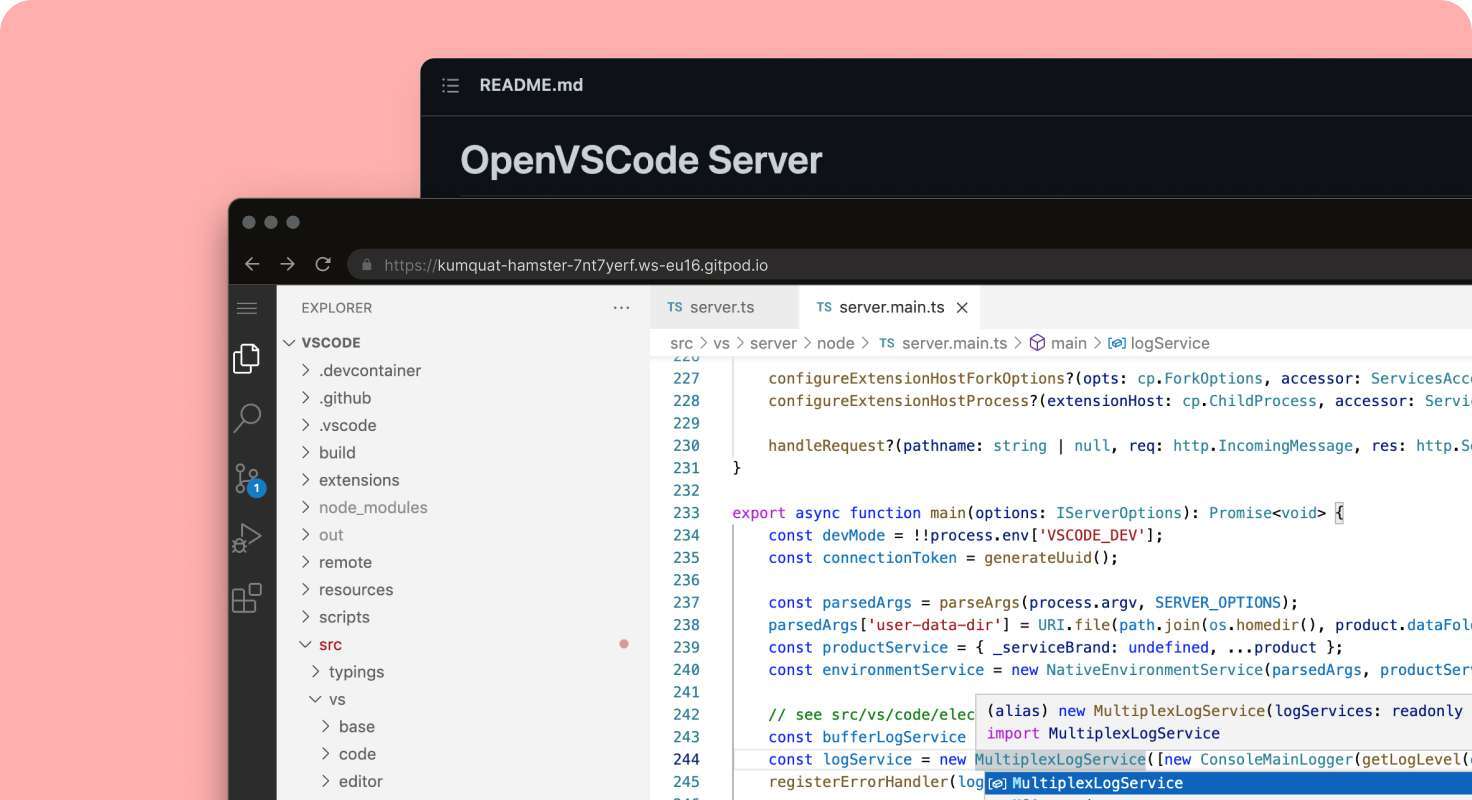 Thanks Microsoft for open-sourcing VS Code Server 👐


When we launched our history of the last four years of Cloud IDEs on Oct 20, we spoke about the road ahead:

As VS Code and cloud-based, remote development continues to grow in popularity, we hope to see the server-side implementation powering GitHub Codespaces being open-sourced in the upstream repository by Microsoft.

A month after we released OpenVSCode Server, we are excited to see that Microsoft open-sourced their server implementation for running VS Code in the browser—the release happened faster than we anticipated 🚀 ! First and foremost we want to say thank you to the excellent VS Code team. The community deserves that the most popular developer tool of the planet keeps its open nature.

While we won’t send them a cake this time 🎂, we wanted to share our take on the release, our nightly sync jobs that enable us to run the latest VS Code in Gitpod and the future of OpenVSCode Server.

Why OpenVSCode Server in the first place?

In September we announced OpenVSCode Server, an open-source project that runs upstream VS Code on a remote machine accessed through a modern web browser. The OpenVSCode Server project is officially backed by our partners from GitLab, VMware, Uber, SAP, Sourcegraph, RStudio, SUSE, Tabnine, Render and TypeFox.

Publishing OpenVSCode Server was motivated by the fact that Microsoft hadn’t at the time published any source code for their own implementation of a server that was able to run Visual Studio Code, which Microsoft uses to power GitHub Codespaces and their remote extensions. Since many developers and organisations wanted to run VS Code as a full web application in their daily workflows with the same low-footprint technique used by Gitpod and Codespaces, we decided to share our own server implementation with everyone.

How We Keep Up To Date With VS Code

As you may know, we provide Insiders builds for Gitpod VS Code and OpenVSCode Server. This process is possible thanks to a couple of GitHub actions we’ve set up. We noticed the VS Code Server changes immediately and started working on integrating them. By now, we have been running the latest builds in production for more than a week and today we are releasing the builds for everybody.

These GitHub actions run daily to update OpenVSCode Server with the latest upstream changes, run integration and smoke tests, and make a GitHub pre-release along with publishing the updated docker image to Docker Hub under the Insiders tag.

This release process allows OpenVSCode Server to get the latest updates from the upstream VS Code code and make new stable releases on the same day as VS Code. We also use the same release process with our VS Code Insiders version that we use inside Gitpod, which enables Gitpod users to go into their gitpod settings and swap their IDE configuration for the VSCode Insiders with the latest features and fixes from VSCode.

The Future of OpenVSCode Server

Unfortunately, the changes from Microsoft don’t give us a full standalone implementation for VS Code Server yet, while the server source code is now also open-sourced and you can build VS Code yourself, you cannot use the extensions marketplace as it is restricted to only be used by Microsoft products.

So OpenVSCode Server adds some much-needed, yet minimal changes on top of VS Code to:

Try the new 1.62 OpenVSCode Server or the Insiders version and don’t forget to leave feedback and file any GitHub issues if you need!

You can also quickly explore the latest version of VS Code from within Gitpod, all you have to do is prefix a GitHub URL with gitpod.io/#https://github.com/example-org/your-repo (or install the browser extension) to get started.

And why not, because Gitpod is free for up to 50 hours a month.

As of today you can now use WebStorm and RubyMine to edit code in Gitpod! Get started by updating your user preferences to WebStorm or RubyMine and starting a new Gitpod workspace!