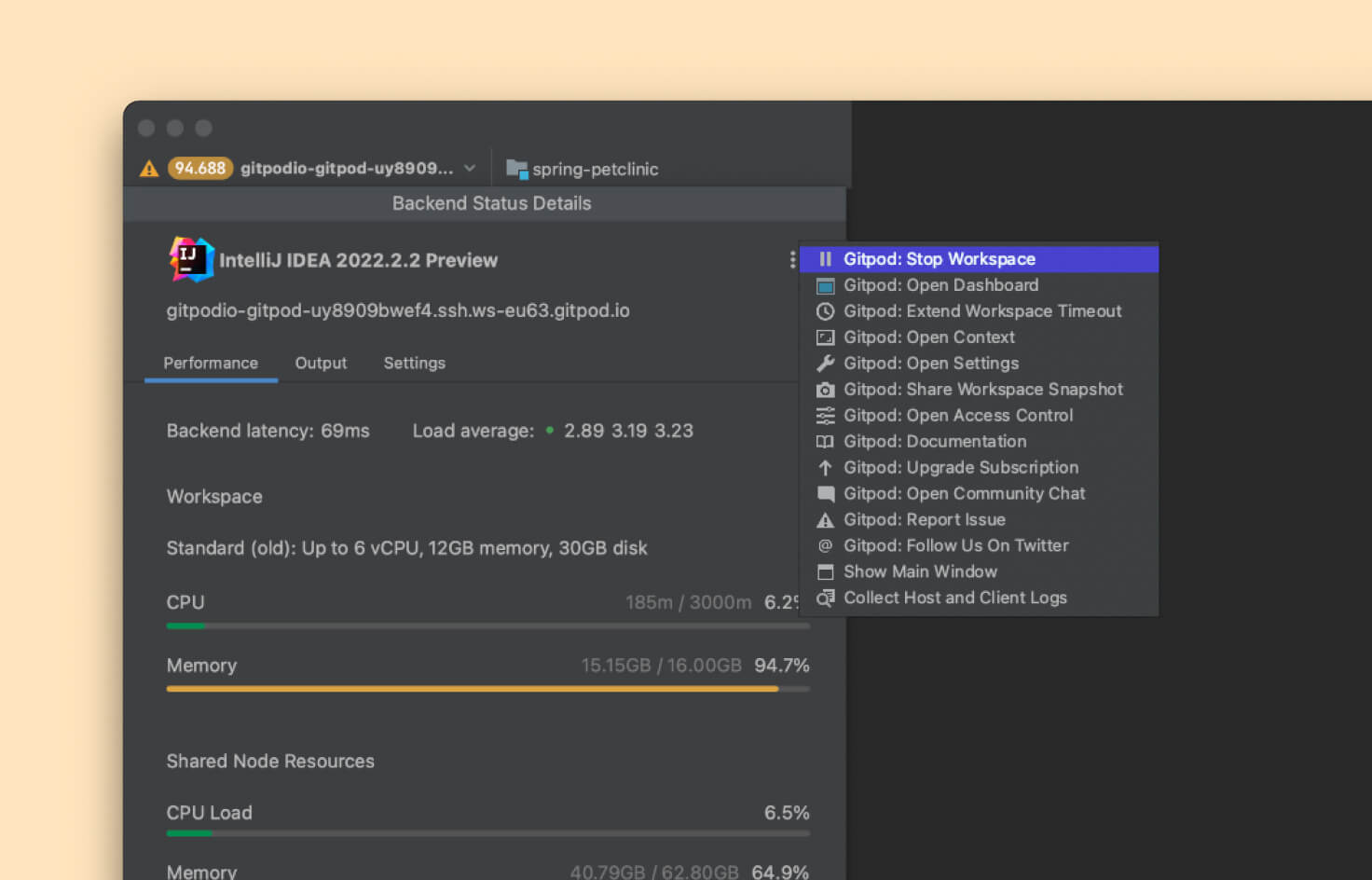 Welcome to the September edition of the Gitpod Changelog!

If you’re a Gitpod VS Code user, you know that in the command palette you can do things like:

However, for JetBrains users, there was no way to access these common Gitpod commands without leaving the workspace. Or worse, opening your workspace using VS Code, rather than your preferred JetBrains IDE. It’s important that all the Gitpod editors and IDEs have a first-class experience for our users, no matter their preference, and our Jetbrains IDEs are no exception.

But now, we’ve added all of the Gitpod workspace actions you could do in VS Code into JetBrains.

That means from within a JetBrains IDE you can directly:

All from the comfort of your IDE. 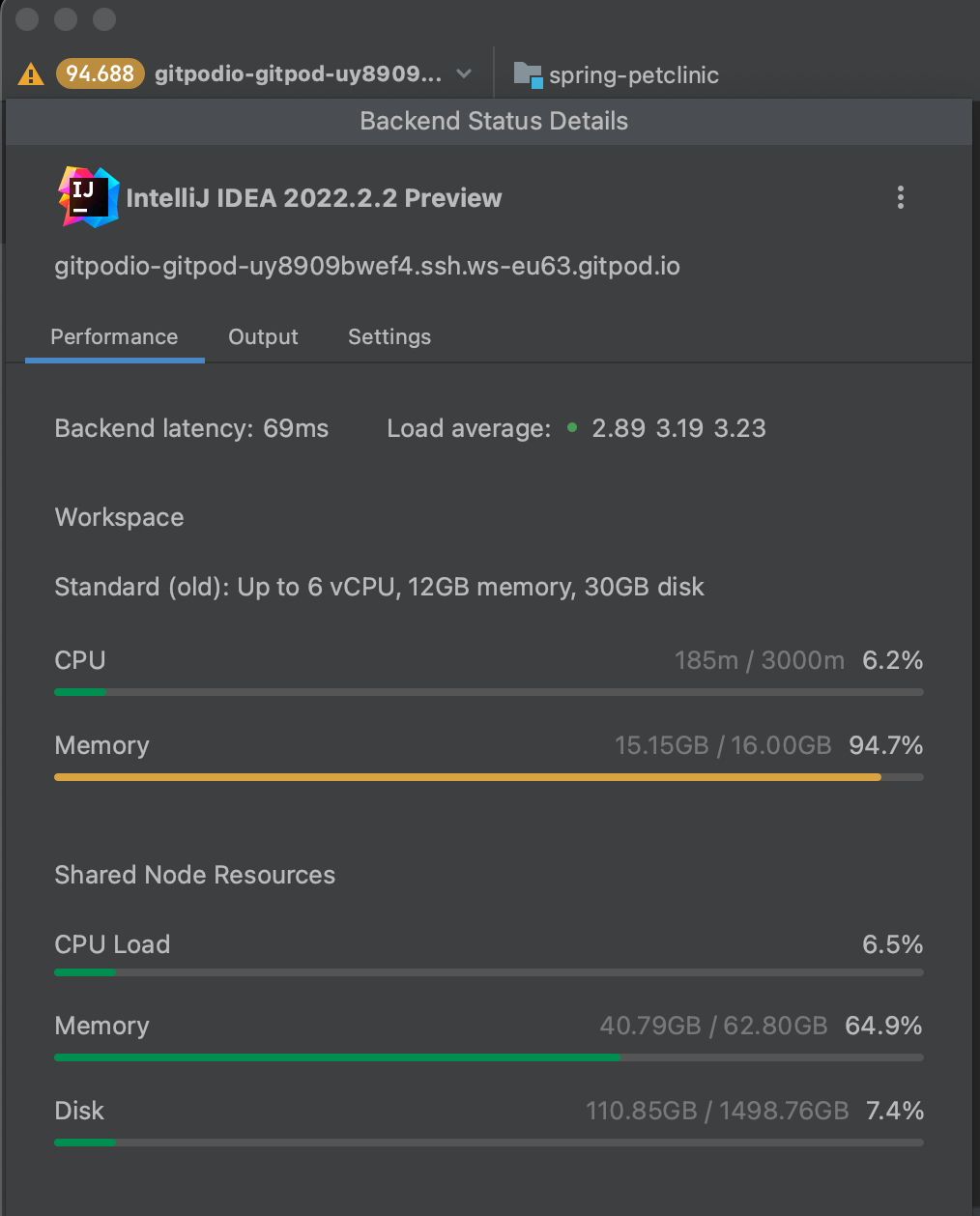 Did you know that when you’re working with JetBrains IDEs in Gitpod you can monitor the performance of your workspace in real-time via the JetBrains Backend Control Center? This feature is useful when your workspace isn’t performing as you’d expect and you want to gather more information. In addition to our recent additions of Workspace CPU and Workspace Memory we’ve now added the actual workspace class to the information shown in the control center.

… but why? When you work in a cloud developer environment, you should have the flexibility to choose the right performance profile for your project. Recently we’ve been working to bring to Gitpod a feature we call “Workspaces Classes” #8261. With Workspaces Classes you’ll be able to select workspace specifications that better match your use case. For example, you will be able to get more powerful workspaces to run larger Java projects and IntelliJ.

So since we needed somewhere to show you this Workspace Class information, you can now find it in the JetBrains performance center.

Tip: You can run gp top to see performance info no matter the IDE or editor you’re using.

New Ports View in VS Code 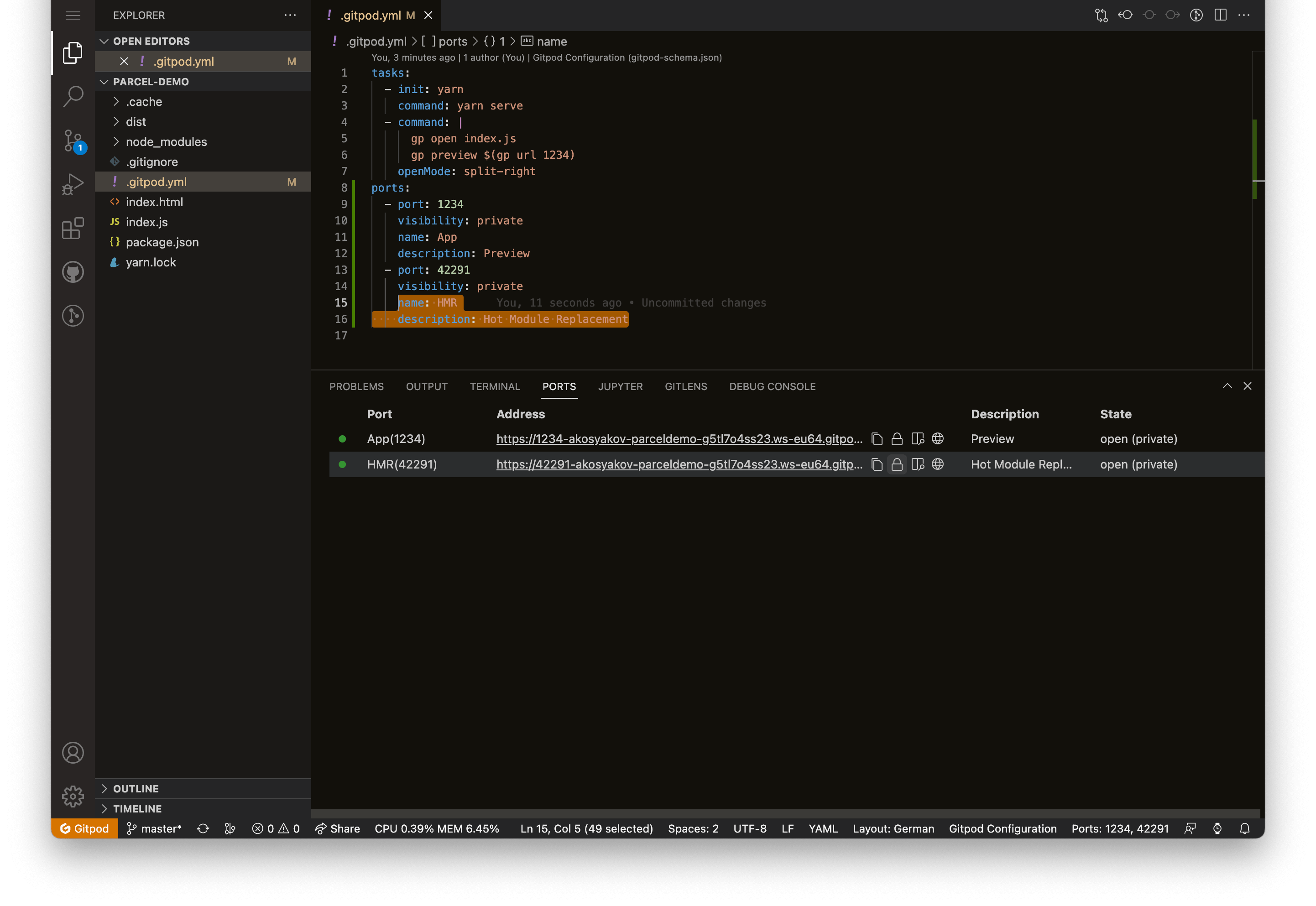 Caption: The new VS Code Browser ports view, shown at the bottom of VS Code alongside the terminals and output tabs

You might have seen in our last changelog that we mentioned a new ports view being added to VS Code (in the browser). At that time we were rolling out the feature to only subsets of our Gitpod users to see how users responded. However, after some good feedback from you (our users) we have pushed the feature out to all users! 🥳

We introduced the new ports view as we wanted to align our experiences on VS Code Desktop with VS Code Browser. We know lots of users like to use Gitpod in the browser sometimes for “smaller changes” like reviewing pull requests. But for more “deep work” many users opt for VS Code Desktop. However and wherever you choose to code, Gitpod will make that as much a comfortable and familiar experience as you’re used to.

We have previously shared about how we updated the underlying connection method of VS Code Desktop to Gitpod for our new SSH Gateway approach. The feature was first released defaulted off for all users. We have since enabled this SSH access method for all users of gitpod.io, and now we’ve enabled the approach for all VS Code Desktop users of Gitpod everywhere, no matter which installation they’re using.

Debugging applications in Gitpod that are written with C++, Rust, or Python just got easier.

Are you working with a large git repository? You want to hear about this.

We have changed how files are fetched from git into Gitpod on workspace start, to make your experience faster. In our testing of the changes, we observed differences from around 2m30s down to 40s. If you’re using large repositories with Gitpod, give it a try and let us know about your experience 🚀